Russian state media reported the plane was carrying 224 people, many of them Russians returning from vacation. There was no word regarding survivors.

UNISFA Brokers Peace Accord Between 2 Key Communities in Abyei

An Egyptian aviation investigation team has reached the site of the crash, state-run Nile TV reported Saturday, citing the minister of civil aviation. 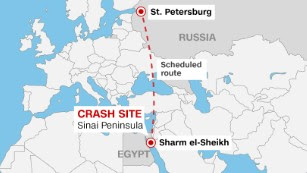 Bodies of plane crash victims are being recovered from the crash site, the Russian Embassy in Cairo said on its official Twitter account.

The Egyptian Prime Minister was meeting with ministers and security officials regarding the crash. An ISIS-aligned insurgency is active in parts of Sinai, but there was no initial indication it played any role in the crash.

Russian media are reporting the pilot radioed to request a landing at the nearest airport before contact with the plane was lost. There has been, however, no official corroboration of that account.

The Northern Sinai medical department declared a state of emergency, according to the state-run Al-Ahram newspaper. The Prime Minister’s office reported that 50 ambulances had been dispatched to the area, which might be difficult to reach due to mountainous terrain.

What we know so far

• The plane crashed in the northern part of Sinai, near a town called Housna — 300 kilometers (185 miles) from the Red Sea resort of Sharm el-Sheikh, according to the Egyptian Prime Minister’s office. Egyptian air force planes have spotted the crash site from the air, officials said.

• Some 224 people were reported to be aboard, including 217 passengers and seven crew members. The passengers included 17 children. There is no word on survivors, according to Egyptian officials. Also, the Belarus Ministry of Foreign Affairs says its embassy in Egypt is working to determine whether Belarusians were on board.

• The airliner was on its way from Sharm el-Sheikh, at the southern tip of the Sinai Peninsula, to St. Petersburg, Russia, according to Sputnik International, an official Russian news agency.

• Egyptian air traffic control said it lost contact with the Russian airliner 23 minutes after takeoff, according to Sputnik. Many of the passengers were reported to be Russians returning from vacations. The plane disappeared at 6:20 a.m. local time.

• The plane was flying at 31,000 feet when it disappeared from radar screens, the Egyptian civil aviation ministry said.

• Russia 24, a state-owned news channel, and other Russian media outlets are saying the pilot reported technical problems and requested a landing at the nearest airport before the plane went missing. Officials have not corroborated those reports. Russia 24 also quotes the FlightRadar 24 website as saying the plane was descending at a rate of 1,800 meters per minute, or 67 mph, before radar contact was lost.

• The plane, Kogalymavia Flight 9268, was an Airbus 321, Russian state media reported. The airline is commonly known as Metrojet.

• Weather in the area was clear.

• The Russian emergency ministry will send three planes to the area to help with possible rescues and the investigation. Russia has opened a hotline for relatives, many of whom have already gathered at the airport in St. Petersburg.

• Insurgents aligned with the terrorist group ISIS operate in parts of the Sinai, which could complicate rescue efforts, as could the difficult terrain. It is not yet known whether the crash site is in a conflict area.

Russia’s Foreign Ministry reported on its official Facebook page that staff at the Russian Embassy in Egypt were monitoring the situation. The page, quoting Foreign Ministry spokeswoman Maria Zakharova, said more information would be released as soon as it was available.

More information is expected soon from the from the Egyptian prime minister’s office as well.

Airbus, the plane’s maker, issued a statement on Twitter.

“We are aware of the media reports,” the tweet read. “Efforts are now going towards assessing the situation. We’ll provide more information as soon as available.”

UNISFA Brokers Peace Accord Between 2 Key Communities in Abyei