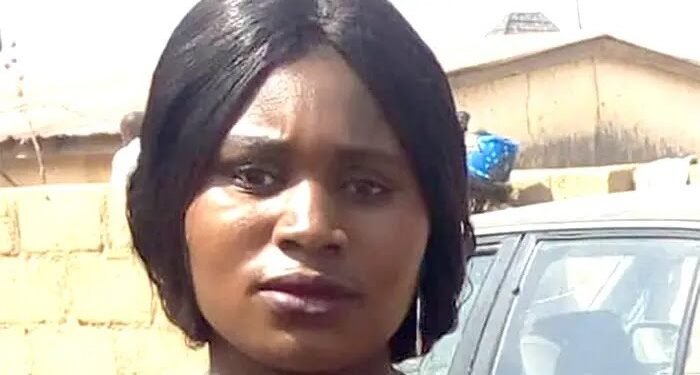 Another obviously violent and jealous husband Samuel Matthew is now on the run after stabbing his wife Mercy over a contribution money she earned from her “adashe” last week Monday and refused to part with it.

Matthew is said to be a regular visitor to the beer parlor close to their house at AngleD Jos South council area and is alleged to be combining his drinking sprees with hard drugs which further toxified their marriage.

Eye witnesses told  metrowatchonline.com  that the relationship of the couple had long gone toxic because they have been having serious physical and verbal fights which had attracted the attention of neighbors on several occasions.

At a particular time, when the woman feared for her life, she had to pack to her parents house to avoid this very harm that had befallen her but the man played the sober card and Mercy returned.

” We all thought he will sober up this time around and stop taking the hard drugs but sadly see what we have on our hands. More trouble because we are yet to see the husband to ask what was the real remote reason for this murder because it can’t just be for that amount.

” We have been able to settle most of their fracas but this time around trouble started when the lady returned from where she sells food stuffs with N60,000 more than the normal amount that she makes for the day. Being honest to her husband, she allowed him to see it

“So Matthew challenged her on how she made such cash almost ten times more than her capital and what she usually makes in a day from her food business. She replied that the cash was from her “adashe” meaning daily, weekly contribution to a general pool of saved money for the benefit of traders with common interests which is paid to a member of the group on a weekly or monthly bases.

” So it was her turn to pick the cash that day and she landed with the money happily at home but knowing that her husband was a drunkard and a drug addicted person made a mistake by allowing him to see the cash thinking it was ok by that.

” Immediately he sighted the cash, he demanded for it but she refused to surrender the money. He did everything to make her succumb she said no. So he waited for her to sleep that fateful day and returned from his drinking and smoking spree. Picked up a sharp knife and pierced her tummy in a probing way to bring out her intestines

“The stabbing was so gory that he knew she will not survive after that because he tied the guts around her neck. This is because he opened up her intestines, brought them out and started butchering them one by one to make sure she looses so much blood after twisting part of it around her neck so she dies in the process.

” It was after the merciless butchering of her stomach that madam Mercy started shouting and crying that the neighborhood should come and help her that she doesn’t want to die that way. That was past midnight towards 1am.

“In the process, we neighbors rushed in and found her in a pool of her own blood and asked her to hold on to her intestines so they don’t fall to the ground while we rushed her to the hospital” said our source who prefers anonymity.

Sadly metrowatchonline.com learnt that “on seeing the state of her intestines, outside her tommy, two hospitals rejected taking the vulnerable woman inside the theatre including the Plateau State-owned hospital that early morning without any special reason.”

Luckily for her the Bingham Hospital off Polo area of the town took her in and by the time they could conclude the operation of sowing back her intestines, she passed painfully after 2am that Monday.

“The rejection of patient Mercy Samuel was one of the unfortunate reason why she lost so much blood leading to her death. Sadly we do not know why the relations of the lady did not report the matter to the bukuru police division in time. Why did they wait until after about 48 hours before reporting such a brutal matter” said a resident security personnel.

When contacted, Police Public Relations officer Gabriel Uba confirmed the incident adding that the Police command was on top of the matter and would surely get the husband.

He regretted that it was sad that a matter which occurred last week Monday, was not reported until about two days after.

Reacting to the incident Minister of women affairs Pauline Tallen directed the Plateau state ministry of women affairs to move in and comfort the family and survivors at this trying time pending further investigation by the police and the arrest of the murderous husband still on the run as at the time of writing this report.