by Isioma Ogochukwu
in Crime
0 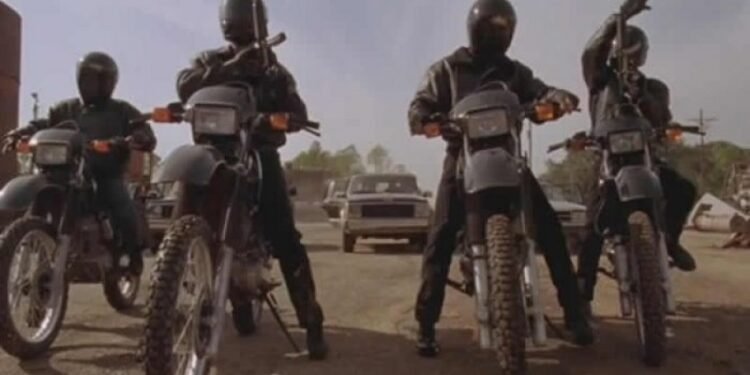 Chief Nwaogu, who was their primary target, was said to have managed to escape from the attackers said to be in their twenties and thirties.

According to reports, the intention of the gun-welding arsonists, who stormed the residence around 12:34am and operated till 3:47am, was to apprehend, kill and dismember him.

It was reported that when they failed to capture him and believing that he was hiding somewhere in the house, they set his house ablaze with the intention of burning him with the property.

Apart from burning his house, the arsonists, who held his family at gunpoint, also burnt Nwaogu’s SUV parked in the compound.

Though no member of the family sustained any injury, the arsonists were said to have waited to be sure the building was completely burnt.

Nwaogu, who is also the coordinator of all the vigilantes in Osisioma LGA, told The Nation on phone the attackers broke into his house through the back after breaking the iron door with an axe.

He claimed to have lost several cash and property in the attack, appealing to Governor Okezie Ikpeazu and public spirited individuals to come to the aid of the family, which has been rendered homeless.

Recalling the incident, he said: “I heard a noise on my door around 12:34 am, that bang woke us up from the bed. They later broke into my house after using an axe to break the iron door.

“They searched the entire house looking for me and after an hour search, when they could not see me, they brought out other members of the family and burnt the entire house including my car and a brand new tricycle parked in the compound to ashes.

“Four of them pointed their guns at my children and wife to stop them from making any attempt to come and rescue me.

“They stayed back to ensure that nothing including me was saved from the property.

“Apart from the building that they burnt, they also burnt my Jeep and a brand new tricycle that was parked in the compound.

“They came by 12:34am and left by 3:17am when they believed that they have accomplished their plans.

“The gunmen stole everything. They made away with my phone and other valuables they could lay their hands on.

“When they left, one of my brothers who rushed to the scene was the one that called the RRS (Rapid Response Squad) who came and took me away from where I had ran for safety while my house was under siege.

“According to my wife, they alleged that I give police information about them which is not true.

“The gunmen dressed in black and tied red clothes on their head. They told my wife while they were leaving that I work for the Nigerian Police and other security agencies.

“That after burning to ashes, in my next world, I will not accept working with the police.

“God knows that I have never used my position as the chairman of PCRC or Vigilante group coordinator against anybody.

“Instead, I have been ensuring cordial relationship between Osisioma Ngwa communities and security agencies and I can tell you that the reason I didn’t die was because that I have never used my position against anyone; my hands are clean. What they want to do is to ensure that I burnt with the house.

“At the moment, I am homeless as we have lost our home and properties. Apart from the clothes my family and I wore to sleep, nothing else came out of that house because they (arsonists) made sure that everything and every room in the house was burnt.

“The loss is heavy and the pain is too much for me and my family to bear.

“We have no roof over our head. We are begging and calling even on well-meaning Osisioma sons and daughters and other spirited individuals to please come to our aid.”