by Publisher
in Highlights, News
0 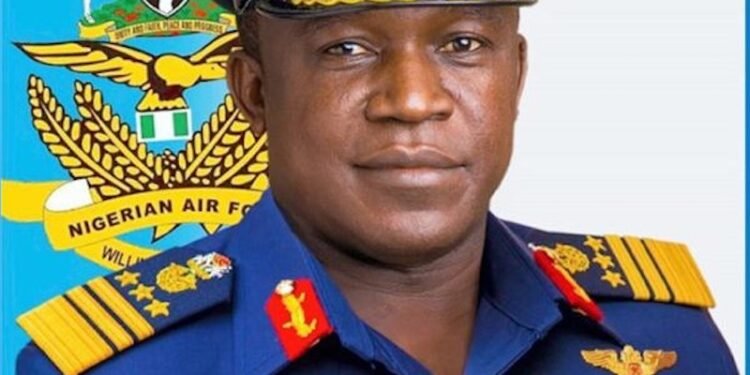 By Muhammad Tijjani
The Chief of Air Staff, Air Marshal Oladayo Amao, on Thursday said that the Nigerian Air Force (NAF), would, on April 30, graduate no fewer than 49 Branch Commission (BC) cadets and 1,549 recruits.
Amao, represented by the NAF Chief of Policy and Plans, AVM Charles Ohwo, disclosed this at a maiden  combined “beating of retreat” for BC 1/2022 and Basic Military Training Course (BMTC) 42/2021 at the NAF Military Training Centre in Kaduna.
NAN reports that ‘Beating the Retreat’ dates back to the 16th century England, when it was devised as a means to call troops back to the castle at the end of a working day.
He therefore said the beating of the retreat would mark the end of formal military training exercises and other organized activities for the recruits and cadets.
He congratulated the cadets and recruits for their successful training, noting that it entailed rigorous and challenging academic and outdoor tactical exercises, especially for the cadets, considering the limited period of their training.
He enjoined them to avoid needless distractions and maintain focus, and urged them to continually internalise, utilise and build upon the training and important lessons they gained which were hard work with integrity.
He said the graduands should put the nation ahead of themselves and seek excellence in the performance of all tasks.
Amao also urged them to place national and service interest ahead of self-interest at all times and be ready to defend the territorial integrity of Nigeria and its interests at all costs.
He commended the Commandant of the Military Training Centre for his commitment towards effective service delivery that ensured the smooth conduct in the training of the cadets and recruits.
Earlier, the Commandant, Military Training Centre, Air Commodore Babatunde Phillips, noted that training of the cadets and the recruits in the Centre was appraised in line with one of the key visions of the CAS which is to foster a disciplined workforce essential for combat readiness.
He said that the Cadets and recruits were taken through rigors of physical fitness and mental alertness, weapon handling and field training, discipline, regimentation and team-work through intensive drill, internal security duties, and basic intelligence, among others.
He added that the Cadets and recruits were taken to Air Force hill several times on exercises and organized various sporting events and obstacle crossing competition to build their stamina and sharpen their reflexes.
“On weapon handling and field training, we conducted three range exercises, culminating into a shooting competition. During these exercises, the cadets and the recruits fired the FN Rifle, Tavor rifle, AR – M5T assault rifle and FN Pistol.
“We also conducted two bush camping exercises to consolidate the cadets and the recruits’ understanding of the theoretical lessons on field training and to give them a feel of a real live operation through simulated exercises,” Phillips said.
•Published by: metrowatchonline.com