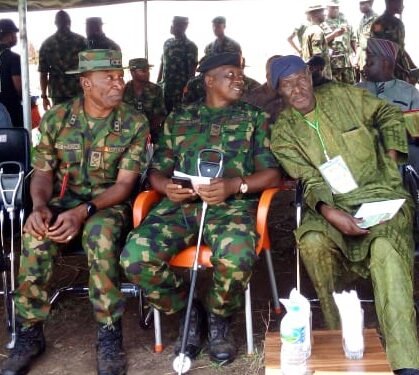 The Chief of Army Staff (COAS), Lt.-Gen. Farouk Yahaya, on Wednesday said the Nigerian Army would be more resolute and lethal in dealing with both perceived, future adversaries and threats.

Yahaya said this at a fire power and tactical maneuver demonstration in line with activities of a seven-day Combat Arms Week Training in Jaji Military Cantonment, Kaduna.

The News Agency of Nigeria (NAN) reports that the Combat Arms are the Infantry and Armour Corps of the Nigerian Army who specially and directly involve in battle.

Yahaya, represented by the Commander, Infantry Corps, Maj.-Gen. Victor Ezugwu, said it was high time for the adversaries to rethink their business because the army would bring in the full wrath of its strength.

“We will employ our strength into bear on any of the adversaries refusing to stop the carnage they are causing in the country.

He explained that in dealing decisively with perceived, future adversaries and threats, it would ensure lasting peace and stability in the state and the country in general.

“The level of insecurity and collateral damage the adversaries are wrecking on humans and resources in the country is bad and we are going to deal decisively with them,” he said.

He noted that within the Jaji environs, they had taken into consideration the farming and economic activities which they would not allow to be melted down by adversaries for the benefit of the residents and Nigeria at large.

“We are holistically taking everything into consideration by carrying everything along with the training to safeguard the loyal citizens while unleashing our strength on the enemies of the country, particular those operating within the Jaji, Zaria and Maraban Jos axis.

“We are continuing this operation even after the end of the combat arms training week to ensure that with the Air Force and paramilitary, we deal decisively with the adversaries,” Yahaya said.

Also, some retired Army veterans of the Infantry and Armour Corps, said they contributed ideas and ways in the course of the training week, to enable more successes in the fight against adversaries in the country.

One of them, Maj.-Gen. Zakaria Yaduma (Rtd.), said he had observed significant improvement in training and synergy between the Infantry and Armour Corps.

“We have related individually and collectively with the Corps Commanders of the two Corps; we identified areas to them which they should improve for betterment of combat in the army, especially as it relates to the combat arms,” he said.