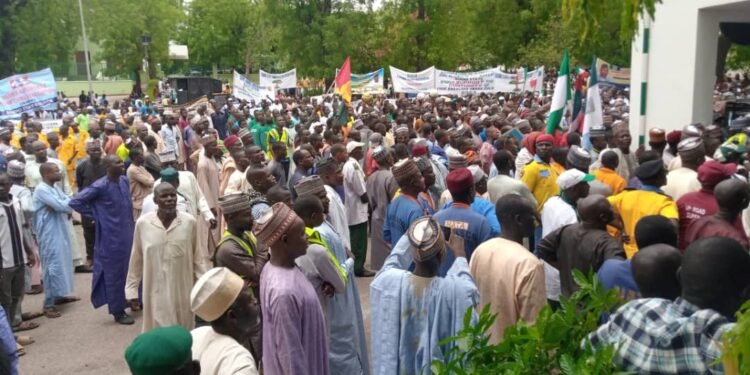 •The Zulum supporters at the Government House, Maiduguri, Borno State

Governor Babagana Zulum of Borno state has said that he attributed all the developments of the state in spite of insurgency to God and not necessarily his prowess or power.

The Governor who was responding to the gesture of N50m cheque presented to him for the purchase of All Progressive Congress (APC) form for the office of Governor for a second term said he gives God the glory for being alive to witness the occasion.

“I have answered your call for the progress of Borno. I am also happy that people that contributed towards this gesture are from as low as N500 to N1000. It gladdens my heart that we have gone this far.

“When you elected me Governor, I assured that there would be peace of mind for everyone under my watch. Now vehicles can go to Gamboru Ngala and back without escorts.

“Fishermen have started catching fish, while farmers now farm in their localities. I assure you that by God’s grace all this will end soon because as long as we keep attributing our gains to Him, he will continue to guide us,” said Zulum.

The Governor pleaded with the people of the state to be patient with him in areas he is yet to touch due to the paucity of funds which is affecting the entire federation adding that as soon as there was more funds, the dividends of democracy will continue to go round.

“We are confident that things will soon change and we shall continue to support all of you from the down trodden to the oppressed,” he said.

Earlier, the Coalition for Zulum for Good Government had presented a giant Sterling Bank cheque of N50m to the Governor issued in his name to enable him purchase a form to contest the next election.

Chairman of the All Progressive Congress APC Ali Dalori commended the Governor for making his people happy from pensioners to workers to Internally Displaced People.

He described Zulum as the father of the poverty stricken, orphans, and all manner of vulnerable people in the society.

A total of 150 unions and associations stormed the Government House Wednesday morning to display solidarity to the Governor who mounted a pick up van to address supporters who stormed the venues.